Secretary of the Senate, Ann Berry, A Great American 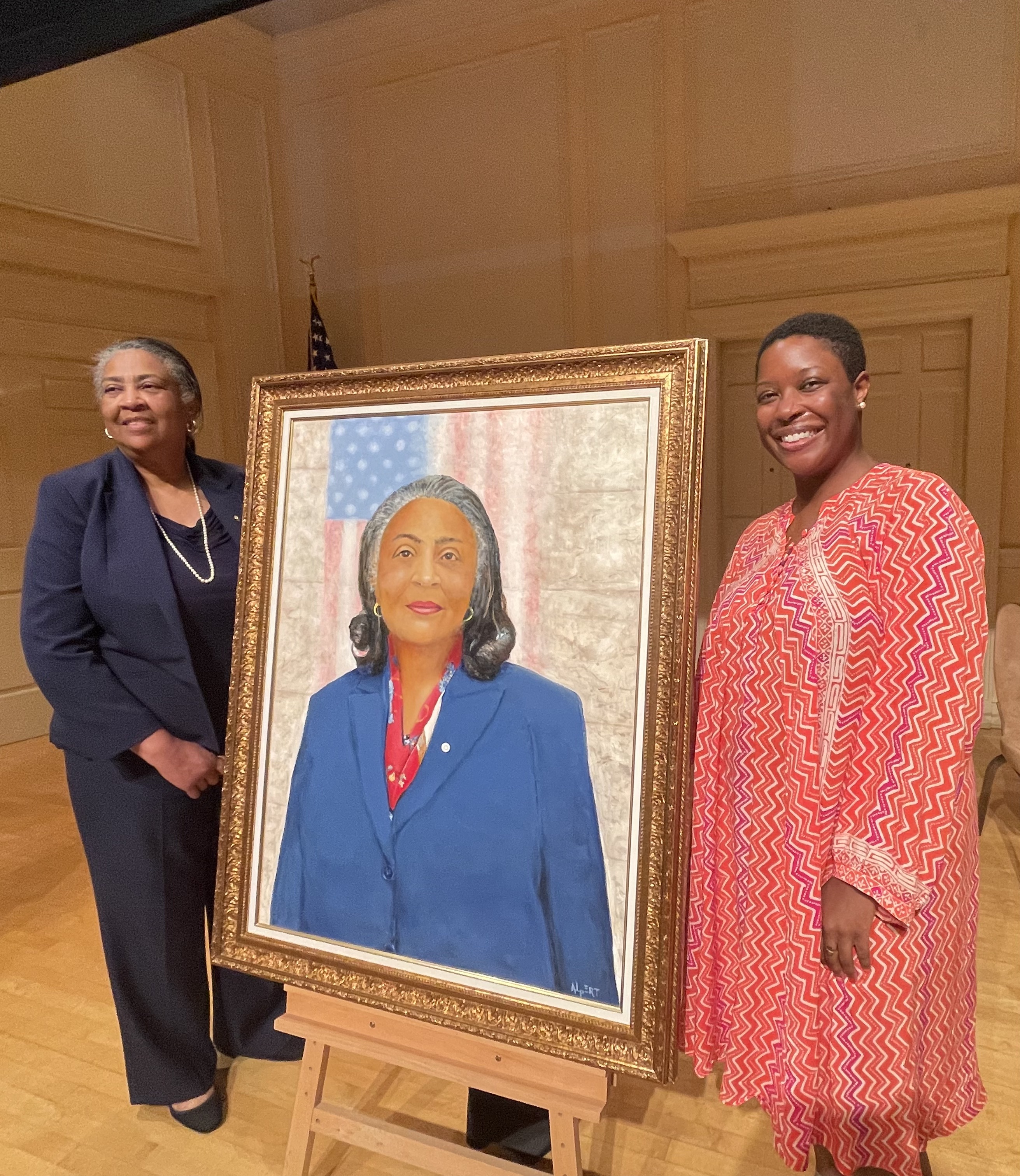 On June 30, 2022, Ashleigh Coren spoke in the Coolidge Auditorium of the Library of Congress in Washington D.C.

"Good afternoon, I’m Ashleigh Coren and I am the Women’s History Content and Interpretation Curator at the National Portrait Gallery and the Acting Head of Education for the Smithsonian American Women’s History Initiative. I am so happy to provide the opening remarks for the 101th person in line for the Presidency, Secretary of the Senate, Ann Berry. Secretary Berry is the first Black person and the eighth woman to serve in the position. She has also served for over 40 years for our country. From Birmingham to Capitol Hill, Madam Secretary Berry has, and will continue to make her mark on history.

Whether Madam Secretary Berry knows this or not, there are so many reasons why this unveiling is so important.

Portraits are documentation and commemoration of people, places, and events. Now, for some who think of portraiture, what might come to mind are oil paintings of old dead white men in stuffy clothing. For a very long time women, and people of color, were largely absent from the medium. Although, we know from history that since the beginnings of this country these groups were instrumental in building and shaping the America we know today. So, there is a very large unpaid bill for representation of women, especially Black women within portraiture. And moments like this, objects like this, are a step in the right direction.

As someone who studies and teaches women’s studies for a living, I know that notable women in American history are more than just a mug, a sign, or a t-shirt. And sometimes, this commodification prevents us from seeing the whole picture, or, we miss compelling stories when we focus on the women who are highly visible. Because it’s both the women who we see on the front lines AND the women behind the scenes who keep this nation from crumbling. The ones who perform Hail Mary’s on a regular basis, the ones who bring teams together, the ones who are the glue in their institutions.

One of my favorite portraits we have at the National Portrait Gallery is this large painting of African American Opera Diva Denyce Graves called “The Recital.” It’s 90 cm tall and she’s wearing this stunning red dress with matching shoes.  I love bringing folks to this portrait because I know it will inspire so many big feelings.

I have seen firsthand the intimacy that develops when a visitor connects with a portrait: the relaxation of their shoulders, the soft gaze that takes over their face. For some, portraiture is a mirror into their own lives, for others, it is a lens to expand or embrace the world they live in. I look forward to the future when this portrait is up on the wall and scores of individuals can look up and have that same experience.

Madam Secretary Berry, we thank you for your service to our country, and this portrait helps us celebrate your legacy for generations to come. Thank you."

Ann Berry grew up in Birmingham, Alabama. Educated at Northern Alabama State, Ann's first job out of college was for the telephone company. An aide from then Senator Howell Heflin contacted the office and asked, "Who is your best employee?" Ann Berry was hired by the Senator's office and worked for a brief time in Birmingham before Ann was moved up to the big leagues on Capitol Hill, the place where Ann would spend her entire career working for Senator Heflin, Senator John Edwards, and then a twenty-year stint working for Senator Tom Leahy. In early 2021, a call came from an aide in Senator Chuck Shumer's office asking for Ann Berry to take the position of Secretary of the Senate to which she responded, "No thank you, that is not something I ever thought about doing."

Ann was content being Senator Leahy's Deputy Chief of Staff. She bore the nickname, "The General" because Ann always knew what to do, what to say to who and when, or not. Ann's management style is at once gentle nurturing, straightforward, insightful, resolute and respectful. Ann is not a person who seeks attention. She is self-contained and easy going, at least on the outside.

"Would you please think about it overnight and I will call back today?"

"I'll think about it, but my answer will still be no."

Later on that day Senator Leahy weighed in, "You know Ann, this is not about you. It's about all the people who come after you." Ann took the job because first and foremost, Ann Berry is a Patriot. She doesn't need to flag wave, she lives it.

Ann and I met through a family connection, about ten years ago, neither of us can remember exactly what year it was, but for my part I feel I've known Ann Berry all my life, and maybe a few past lives. First time we met we lunched in the senate cafeteria. Southern fried chicken, Lord have mercy. We talked for three hours. About everything. Through the years we have shared many meals three maybe four times a year. Ann Berry is one of my most favorite people and I am honored to call her my friend.

Last April I told Ann that we need to have a portrait of her. "No, we don't," she said. I replied, "Yes, we do and we're going to do it." A few weeks later Ann took me to the sacred space of the Rotunda in the Capitol and I took many photos, resulting in a three-month effort on my part to do Ann Berry justice in oil paint. No portraits are easy. They are death defying. Until I get to the place where I have the image, "in my hand" I am angry, upset, can't sleep well and ornery. But, once I get to that magical place, ah...life is very good again. Ann and I made a pact that Ann would not see the portrait until it was unveiled. Somewhere, somehow. Neither of us had a clue how this might come about but we both had faith it would. And it did in the last few weeks.

Enter AnnMarie Halterman founder of Uniting Us, an organization dedicated to veterans who are artists. AnnMarie and Uniting Us conducted a special week for invited veterans who make art, to the Library of Congress to set up and make their work as visitors stream by and interact with the veterans. It was quite wonderful. At the end of the week a celebration in the auditorium where we heard the beautiful music from the Air Force Women's Brass Band. AnnMarie afforded us the opportunity to conduct our unveiling of the Ann Berry portrait at the conclusion of the afternoon's proceedings. Much gratitude to you, AnnMarie, I will always be grateful for your generosity.

I will conclude with the words of Ann Berry who wrote to me in an email yesterday...

"When you called my name to come on the stage …. All I could think about again is “why me”  I was numb for a few minutes thinking “is this real?” I’m standing on a stage at the Library of Congress having a portrait of me unveiled and seeing my friends and colleagues in the audience was unbelievable.  And when you unveiled the portrait and I could hear the applause it all became so real.  I have always been impressed by your work, so I always knew that I would be pleased, but to be honest I was even more impressed when I saw the portrait.  It was evident that you put your heart and soul into my portrait and it shows!   I don’t think much about me … a girl of color being from Alabama even though I know a lot of my family and friends do!  I think about the many people I met on my journey who brought clarity to who I am and what I want to be.  I don’t think about being black or poor …. I think about the sacrifices my parents made for me and my brothers to be “the best that we could be”.  I think about all those who I have met along the way who gave me a chance and had more confidence in me than I did in myself.  It is always good to remember where you came from, but more importantly where you want to go. Every day, I thank God for the many blessings that have been bestowed upon me."

The portrait of Ann Berry brought together a small community of people to celebrate one woman in our midst who has touched so many lives in so many positive ways. This is the enduring power of art and how it has worked since cave drawings celebrated the successful hunters that kept the people alive. Different materials today, and endless subject matter as artists reflect the times in which they live. I am grateful to be a part of this grand tradition, and to travel with all the people associated with the continuum of celebrating life through art.