"Legacy," A Painting Called to Service 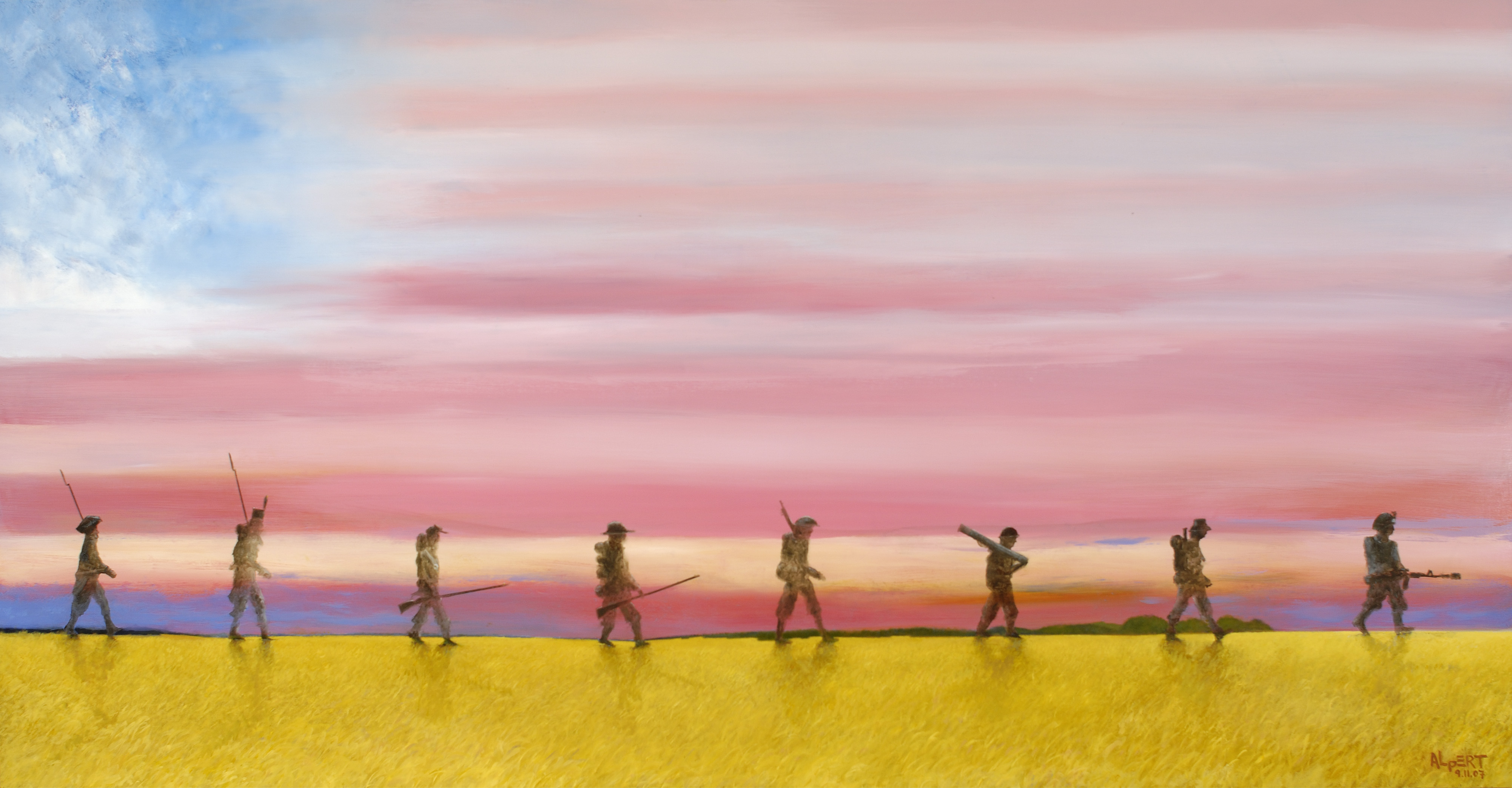 “Legacy,” A Painting Called to a Long Road of Service

Children of Fallen Patriots, — childrenoffallenpatriots.org — raises funds to pay for college tuition for kids who lost a parent while in the line of duty.  CFP is the exceptional brainchild of U.S. Army veteran David Kim and his co-founder wife Cynthia Kim. CFP has raised more than $56 million dollars since inception.  More than 2,200 young men and women have been assisted with college tuition.

“Legacy” is a large oil painting, 42” x 78” I made in 2007 depicting eight foot soldiers from the eight uniform eras of the United States Army.  The large metal print of Legacy was saved for the last auction item.  The brilliant auctioneer Jason Lamoreaux kicked up the drama and bid the print up to $50K.  Then Jason leaned over off-mike to ask the second highest bidder if they would match the top bid and we would make an additional print.  Done!  Two prints sold at $50K each. Last November in Greenwich, CT, two large metal prints of a different painting, “Salute,” brought in a combined total of $94,000 at the CFP gala.

What struck me as ironic was that the concept for the Legacy painting had been hatched just three blocks away from Cipriani, fifteen years ago.

June 2007.  A small meeting room at New York Private Bank & Trust on West 43rd St. between Vanderbilt and Fifth Ave. The meeting was hosted by then bank President Bill Fuhs. Bill invited Jan Scruggs, Vietnam veteran and Founder and President of the Vietnam Veteran Memorial Foundation that had built the Vietnam Memorial Wall in Washington DC.

Now Scruggs was gearing up to create a museum adjacent to the Wall calling it, “The Education Center” where all the men and women who served in the U.S. Armed Forces from the Revolutionary War to the present would be listed through multi media exhibits.   Scruggs had heard about my paintings honoring men and women who serve in uniform and wanted to meet to discuss the making of a special painting for his new museum.

Lunch was served by a formally attired waiter in white coat and gloves.  Scruggs, his assistant, Fuhs, another bank exec, and myself.   Smalltalk about the details of the proposed museum.  A feeling in the air that there was a serious reason for this meeting.

Then Scruggs asked,  “So what are you thinking about the painting?”  All heads swiveled toward me.  Truthfully, I wasn’t thinking about anything. My mind was a blank canvas. Silence.  All eyes boring in on me.

A couple of beats.  I noticed I was not breathing.  Having participated in hundreds of creative-driven meetings in my thirty-five year stint in television production, there must be something…. a scene from Saving Private Ryan popped into my head. Tom Hank’s squad was silhouetted against the sky as they crossed an open field.

WHOA!  Speechless.  He lit up the room!  I envisioned what Scruggs had just laid out.  It coursed through my body like a laser.  What an idea!  Everyone was very excited. For me terror turned to relief then turned to victory.  I committed to completing by end of September, four months away.

Suddenly, I landed back on 43rd St, still soaring and unable to notice my feet actually touch the sidewalk. This painting had Destiny written all over it.  And from that moment until completion months later there was not a minute of peace or rest in my life.

The pressure exerted on myself by me was enormous.  Sacks of concrete stacked on my shoulders, a nation of butterflies took up residence in my belly. And, I never felt more alive.  The previous painting just completed, “Portrait of a Soldier” was a major breakthrough and triumph.  The momentum derived from that piece carried me into the fifteen foot wave I was heading into. Paintings are stones on the artist’s path.  The previous painting prepares you for the next and the next…

The sky, the figures, the uniforms, what is the foreground, how does all of this get integrated into a cohesive painting to tell the big story that Scruggs laid out…? Sleepless nights, daytime anxiety, constantly poring over the never ending details of how to make this thing, what this thing would look like.  Making this painting had so much to live up to…this was an Olympic championship in my mind.  Am I up to it?  All the boo-birds were out there in my head rooting against me, telling me I would fail, that I was not ready for the big leagues.  Took a lot to put all that muck aside and just simply get to work and build the painting step by step, one day at a time, which truly became a joyful adventure.

Scanning skies for a month before landing on an idea for a sky that was reminiscent of a flag.  This was the most difficult part.  The sky was key and all would flow nicely if I could nail the sky.  An artist friend, Rande Greiner and I has similar ideas at the same time. The American flag.  Yes, but.  That graphic look was done in the opening scene of the movie, “Patton.”  This painting would have to have a sky that could pass as a sky and a flag  Ok.  Took seven days to lay down that sky, dozens of transparent layers, like glass almost.  Now I took the booing crowd out of the game.  I was now free to get into the real work and put all the psycho babble behind.

The soldiers.  Asked my friends to come over and walk across the back deck.  Took photos. Matched their figures with who I thought they most resembled from each era. My friend Ken Greiner as the tall thin Doughboy, Jeff Miller as the jaunty and dangerous Vietnam Jungle Rat, Rich Petrocelli as the WWII dogface slogging along, and my wife Dorothy as the present day woman soldier — her idea — and she was not be denied.  She was correct, of course. “Would you please walk across the deck…”

Two trips to the Cadet Museum at West Point to work with a librarian with encyclopedic knowledge of uniforms.

The foreground choice…”amber waves of grain…”

Title?  “Legacy” was the first to come to mind and stuck.

Done.  An equal portion of exultation and relief.  All would be well.  I could live in the world again. Whew.  Dodged a bullet and lived to paint another day.

Jan Scruggs began his fundraising efforts as the economy cratered.  Timing is everything. The museum never materialized.  “Legacy” stood in my studio in a cubbyhole for years.  I knew it had a huge job to do but there it was, sitting there waiting waiting waiting. Every time I walked into the studio i saw Legacy standing there, and it gave me physical pain in the thorax. I have learned that paintings have their own lives and timelines.

A few years later a man said to me after seeing the image on his computer, “What if those soldiers could step out of the canvas and tell their stories?”  WHAT???  That inspired a stage play Tony Award winning Producer and friend Ken Greiner and I put up; “The Steadfast” by Mat Smart. Three years in the making, we ran 14 performances off-Broadway to a remarkable NYTimes review, a reading in Atlanta, and a high school production in Texas.  The play was about the effects of war on soldiers and their families.  I had audience members come up to me after a performance and say that every American should see this play.

Who knew ”Legacy” would live on to create so many thousand of dollars to pay college tuition for the children of fallen patriots through the organization with the same name?  Miraculous.  Never question the true power of art.

For this artist, it is beyond mind-boggling.  How did this happen? I don’t really know.  I just keep going and at some point Fate seems to intercede. I go to bed at night thinking that this painting will help a young person who has suffered the great loss of a mother or father so early in their life, and now Children of Fallen Patriots to the rescue to help pay for their college eduction.  As Medal of Honor winner Jack Jacobs always says as CFP Gala host, “It is an investment in the future of our country.”  So to all those who donate generously to CFP and to all Veteran Service Organizations, I say thank you, welcome to the team.  We have a lot more work to do.

Two weeks ago I had the pleasure to sit next to a mother and daughter who lost husband and father to an airplane crash. Daughter graduated Penn State and now works in New York City for a reputable company.  Mother has a thriving career that she loves in service to people with a unique need.  Children of Fallen Patriots stepped in and made it possible for Kamryn to have a wonderful college education.  Made it so real for me to get to know them. To witness firsthand the results of all the care and passion and plain old hard work of Americans supporting our fellow Americans.

Presently I am searching the Universe for the next painting in the ilk of, “Legacy” that we can offer up at upcoming fundraisers. I don’t know where the ides will come from, yet.  But I know it will come when it is ready.  That’s how this crazy magic works…